This 9-minute video describes our family’s trips around the world to witness solar eclipses, with the culmination August 21st, 2017 of our experiences in Prairie City, a small town in eastern Oregon.

We viewed the solar eclipse of August 21, 2017 from Prairie City, Oregon, about 5 miles from the centerline of the path of totality. This video includes a time-lapse sequence of the partial phases (about an hour-and-a-quarter real time into 20 seconds) and still frames of totality ( which lasted 2 minutes 9 seconds).

Sunspots are visible during the partial eclipse phases. The diamond ring and Baily’s Beads are visible just before totality. The corona and solar prominences can be seen during totality, and the bright star Regulus in the constellation Leo is visible to the left.

Images were captured using a Canon EOS 6D camera attached  to a Takahashi FSQ-106 telescope on an iOptron CEM25 mount. The camera was controlled by a Windows 10 PC running Eclipse Orchestrator Pro v. 3.7.2017/06/14 from Moonglow Technologies. Accurate timing and geographic location information were obtained using a Garmin GPS 18x USB device. The computer was connected to the camera using two cables: A camera interface cable, IFC-200U from Canon and a DSUSB shutter control adaptor from Shoestring Astronomy. A solar filter from Orion Telescopes & Binoculars was fitted over the aperture of the telescope during the partial phases.

On September 27, 2015 at dusk, we observed the full moon rising over the Cascade mountains when it was already in eclipse. At first it was difficult to see as the sky was not very dark yet. Then gradually as the moon rose and the sky darkened, the dark red orb became more apparent. As the moon moved through the Earth’s umbra shadow, patterns of brightness changed until it finally emerged as our familiar bright full moon.

If you were standing on the surface of the moon during this eclipse, you would see the Earth blocking the sun, and surrounded by a ring of red-orange light. In essence you would be seeing all the sunrises and sunsets of planet Earth at one time. The center of the Earth’s shadow is toward the upper right in this photo and the lower left is not as deep in shadow.

This is a “phase” of the moon you will never during a typical month — a bite taken out of the full moon as the moon emerges from the Earth’s shadow or umbra.

These images were taken with a Canon 6D DSLR camera with an f/4 300mm fixed lens on a tripod.

A Transit of Venus (Venus passing across the face of the sun) is a rare event. This alignment of Venus directly between the Earth and the Sun will not occur again until the year 2117, when I am 169 years old. So I really wanted to see this one. Cynthia and I had planned to drive to Eastern Washington if the sky conditions there looked more favorable. But on the contrary, on Tuesday morning the forecast for East of the mountains looked worse than for here (cloudy to mostly cloudy). So we decided to stay on Whidbey and take our chances.

It was raining here early Tuesday afternoon, June 5 and the sky was overcast. The Venus transit was to begin at 3:06 pm. But this ever-optimistic astronomer went out to turn on his equipment in the observatory and set up the “sun funnel” he built for this occasion.

Friend Sue and second cousin Emily showed up full of hope, believing that anything is possible: for all we knew, we could get lucky and the sky could clear just in time. We couldn’t open the observatory dome right away, but by 2:30, the rain had turned to a light mist so we opened the dome. 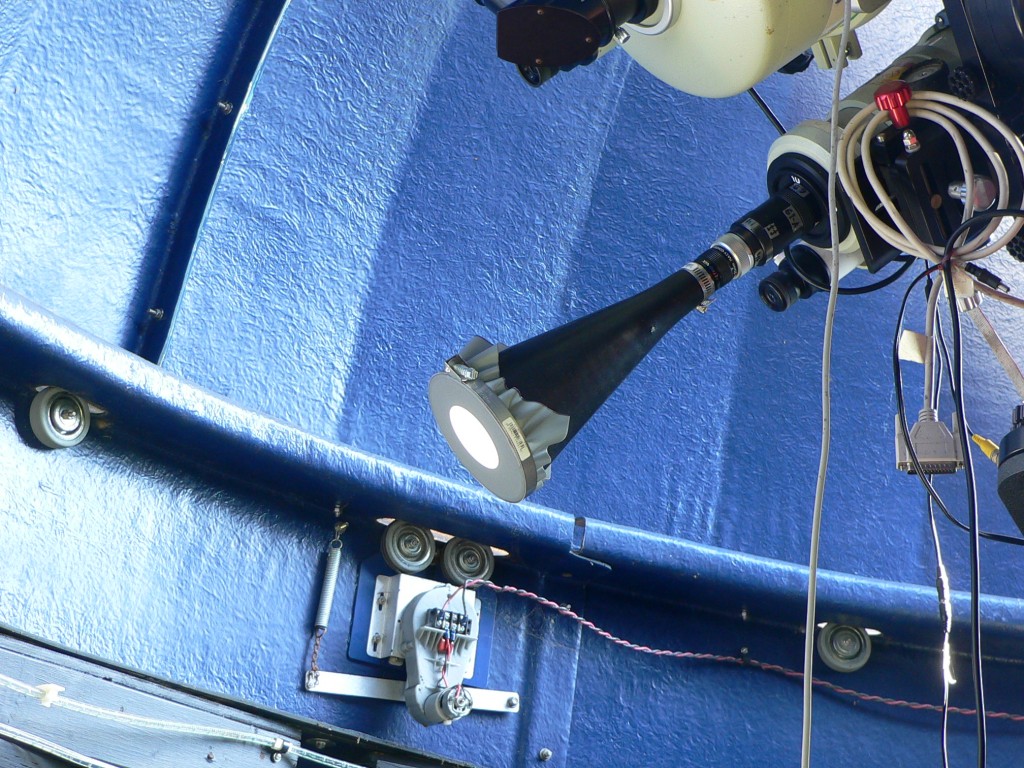 This "sun funnel" is attached to the telescope eyepiece.

It was too cloudy during First Contact (when Venus first appears to touch the disk of the sun) and Second Contact (when Venus is completely inside the disk). But about 45 minutes after the transit started, the clouds thinned out a bit. We never had a clear sky, but the clouds were thin enough that we could see an image of Venus, along with a few sunspots and clouds drifting by.

Venus crossing the face of the sun

Transit of Venus about an hour after first contact

Cynthia viewing the transit of Venus

Be sure to take a look at the movies taken by the Solar Dynamics Observatory, which is an earth satellite in a geosynchronous orbit at an altitude of 22,000 miles.

So thank you, Sue and Emily and Cynthia for your optimism. I’m glad I don’t need to wait until I’m 169 to see my first transit of Venus.